A community-led revegetation project is underway at Bells Beach thanks to a generous grant from Patagonia. Surfers Appreciating the Natural Environment (SANE) and Parks Victoria were awarded the $10,000 in funding to work in partnership on the project at the Southside carpark. 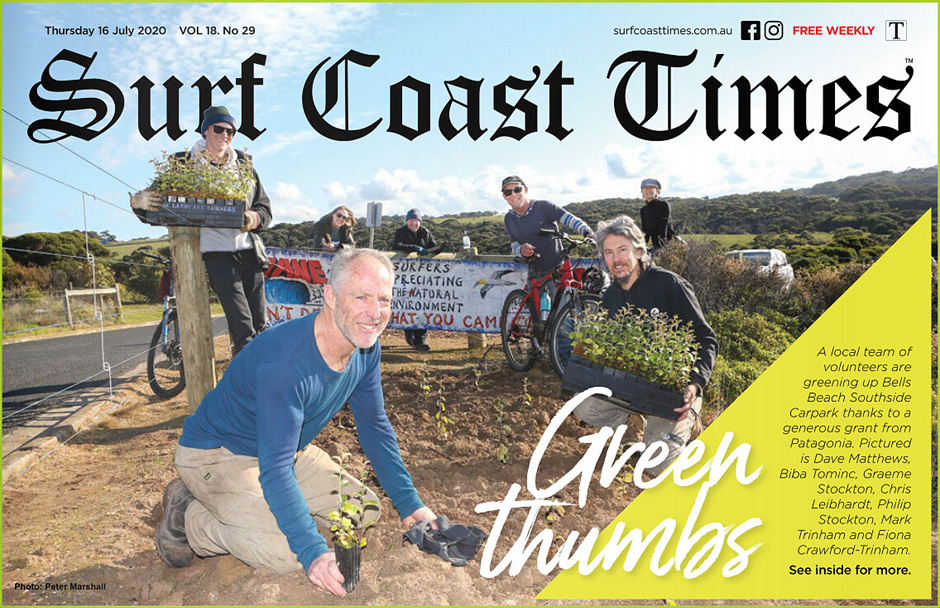 Work began in June and includes the construction of a new fence and defined walking track, rubbish clearing, mulching and the planting of 600 indigenous shrubs. SANE convener Graeme Stockton said the effort was being powered by an energetic team of local volunteers who attended the group’s monthly working bees.

Mr Stockton said the aim was to protect an area that was bearing the brunt of an increase in visitation in recent years. “This along with poor behaviour via littering, toileting and trampling on the vegetation, was taking its toll,” the Bellbrae resident said. “Over a period of time there was a degradation cycle that was getting worse and worse. “The fencing is a critical part of the project because it separates people from the plantings.” Mr Stockton, who owns West Coast Indigenous Nursery, said the fencing was now complete and the final 200 shrubs would be planted at a working bee on August 9. He said the fencing would eventually disappear into the vegetation as the new plantings grew.

Mr Stockton praised Patagonia for its support, saying it was terrific to have the community, government and a corporate partner all working together to protect the natural environment. “It’s some good news in a sea of bad news,” he said. “Parks Victoria and SANE are deeply indebted to Patagonia for helping us to revegetate and look after our precious coastline”.

SANE was founded in 1987 when a group of Torquay surfers and friends became increasingly concerned about the management of the fragile coastline, particularly the Bells Beach area. Mr Stockton said people were always welcome to join the group, but the exising COVID-19 restrictions dictated that there was a limit of 12 volunteers permitted at each working bee. Anyone interested in volunteering should preregister via email This email address is being protected from spambots. You need JavaScript enabled to view it. or phoning 0425 752 648.